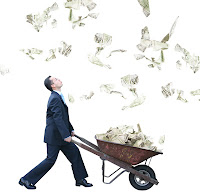 Rhetorical cash cow guaranteeing regular payments of Decent Dole to newspaper columnists who have become too senile and incoherent to earn a living, as regularly paid by Slate, The Guardian, Standpoint and the Times.

Originally attributed to Comrade Hitchens, the Formula is expressed thusly...

Did (American action X) cause (atrocity Y)? No!

Rinse and repeat as needed. See also: Condemnit!
Posted by Malky Muscular at 05:24 No comments:

Not to be confused with totalitarianism, whereby citizens vote for candidates ostentatiously Condemned by Decents.

Democracy in Action - A Quick Guide To National Elections

1. Formal procedure by which Iraqi democrats appoint Islamists with links to unsavoury terrorist groups as their official representatives and rulers.

The ultimate expression of the will of the Iraqi people, demonstrating their immense hunger for freedom.

2. Formal procedure by which Palestinian fascists appoint Islamists from unsavoury terrorist groups as their official representatives and rulers.

The ultimate expression of the will of the Palestinian people, demonstrating their immense hunger for genocide.

3. Formal procedure by which a US-installed and supported former Unocal oil consultant and ex-CIA asset appoints himself as the Afghan people's official representative and ruler.

The ultimate expression of the will of Hamid Karzai, although of course not representative of the will of the government of the United States nor their intelligence services, who frown upon election-rigging in countries that they militarily occupy and over which they exercise de facto control.

4. Formal process by which Iranian democrats appoint the clerical fascist former prime minister of the Islamic Republic and right-hand man of Ayatollah Khomeini, and actually get Mahmoud Ahmadinejad as their official representative and ruler.

The ultimate expression of the will of the Iranian people, contingent upon the Iranian opposition remaining out of power. Should the opposition actually take power, they will instantly cease to be democrats and revert to being horrifying, totalitarian fascist monsters thirsting for war and genocide.

Supported! unless they actually win, at which point they will be immediately Condemned!

5. Formal process by which Venezuelan idiots vote for the terrifying socialist monster Hugo Chavez as their Supreme Dictator-For-Life.

The ultimate expression of the will of the people, demonstrating their immense thirst for a Thousand-Year Reich of bloody Bolivarian horror.

6. Formal process by which Lebanese democrats appoint whichever Armani-suited warlord or gangster shares their ethno-religious identity as their official representative and ruler.

The ultimate expression of the will of the Lebanese people, demonstrating their immense hatred for Hezbollah and warm, near-sexual affection for states that periodically invade, strafe and cluster bomb their country.

7. Formal process by which Spanish pussies are intimidated into appointing anti-war appeasers of fascism as their official rulers and representatives.

The ultimate expression of the cowardice of the Spanish people, demonstrating their pitiful, wimpish inability to take a few terrorist bombings and bullshit government propaganda efforts without going all weak at the knees and bowing before fascists.

Final analysis of the Afghan election is contingent upon the outcome of Hitchens vs. United Nations, currently being heard before the Court of Decency.

Case summary: Hitchens observes blatant electoral fraud perpetrated by a US-installed and supported former Unocal oil consultant and ex-CIA asset in an epic campaign of ballot stuffing, and concludes that said fraud is entirely the fault of the United Nations. Hitchens further commends the ultimately futile efforts of the Americans to prevent the theft of the election by the candidate that they have both financially and politically backed for decades.

Labels: Proceedings Of The Court Of Decency, Rhetoric

Entirely unremarkable group of individuals engaged in thoroughly commonplace and humdrum attempts to influence government policy and public opinion through the medium of the popular press and glorified cheese and wine parties, any reference to the existence of which is racist in the extreme.
Posted by Malky Muscular at 05:20 3 comments:

Foul, genocidal racists directly supporting the terrorist assault on democracy itself. They should all be ashamed of themselves, especially Antigua and Barbuda. They're the worst racists of all.

You Don't Have To Be a Muslim To Be Furiously Denounced, But It Helps

It seems like The Encyclopedia of Decency is in trouble with the chardonnay-swilling, braying, hooray Henry bien-pensant community again. Brie-scoffing, pony-trotting posho elitist Penny Laurie posts these words about us at The Samosa...

The Encyclopedia of Decency has pursued what has been seen as a "witch hunt" against any Muslim or Muslim-ally who does not fit the site editors' strict definition of "moderation"; to whit, near non-involvement in politics.

Let's get this clear. The Encylopedia is - inter alia - a website to which those individuals who hold deranged, belligerent hardline right wing views on a wide variety of national and international issues are welcome to contribute, provided they are willing to coat their wingnutty babble in a thick layer of faux-lefty bullshit about anti-racism.

We're against baleful theocratic conspiracies against democracy that threaten to hold the scimitar of head-chopping Islamic law to the neck of the human race, and we pull no punches in writing snotty blog posts about those who are in favour of such set ups, no matter how Muslim they are.

In short - you don't have to be a Muslim to be repeatedly and vociferously denounced as a brutal threat to peace and freedom in a frenzied circle-jerk of ever-increasing paranoia, but it helps.

I should clarify something else too. The Encyclopedia is not a racist hate site, although anyone who came here looking for endless, inflammatory booga-booga scaremongering about one particular minority religious group certainly wouldn't be disappointed.

The Encyclopedia is more of a voluntary police action aimed at a) defining our own fucknut, rah-rah pom-pom waving for one-sided violence as the outermost boundary of acceptable opinion and b) sending great snarling packs of feral right wing bigots snapping at the heels of those with the temerity to differ.

Nonetheless, it is far easier to portray these attacks on our race-fixated commentariat as the effete affectations of politically correct liberal woofters than it is to directly address the issue of our obvious witch hunting bastardry, so let us slyly gloss over the Samosa's entirely accurate accusations of McCarthyism.

So, in summary, Penny Laurie is - like most with the effrontery to criticise our monomaniacal zeal for partisan condemnation - very, very posh. Regular readers will know that the Encyclopedia is published straight from the Stygian blackness of our proletarian coal mine, and its hard-grafting, rough-handed writers do not take well to being ticked off by some tofu munching, proto-lesbian Jemima.

Let us then return to the good work of sniffing out vaguely suspicious opinion for political gain. We can do so secure in the knowledge that our relentless war upon reason, truth and basic human decency is the pinnacle of working class activism, rather than simply a bunch of illiberal, whining ex-Trots camouflaging their rocket propelled rightwards trajectory with a load of mealy mouthed and dishonest waffle about fascism.