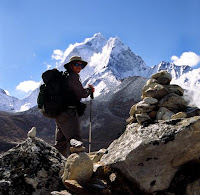 Could we have a definition of Power (as in Samantha Power) please? I was thinking of something like 'brilliant, seasoned, grown-up foreign policy advisor, tipped for imminent promotion in Obama's campaign team.'
http://commentisfree.guardian.co.uk/alan_johnson/2008/03/a_power_of_good.html

Not forgetting the bone-headed democratic internationalism. You know it makes sense.

We had a good example of this recently at Hitchens Watch. One of the house Decents equated a particular "crowd" who supposedly hold some extreme position on Tibet with the Khmer Rouge and Nazis.

For anyone who does the "Tibet!" thing, there's a counter-whattabout called "Xinjiang!"

Xinjiang, along with Gansu, have been settled for decades by the Uyghur people, who have been the focus of a great deal of repression from the Chinese government.

There's only one hitch in their struggle being as well-known as that in Tibet: they're Muslims.