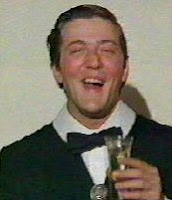 Despicable gathering of moral relativists, commonly attended by champagne-swilling trendy lefties for the purpose of affirming their own class-based sense of moral superiority while gently wanking a thick, gelatinous plasm of smug condescension over the working man.

Much-lamented social occasion for effete elitists and cosseted Hampstead liberals, where ivory-tower intelligentsia stuff their faces with self-consciously ethnic foodstuffs while belching great, noxious clouds of bile and self-satisfaction, leaving Decent Observer columnists to seethe at their own frustrated impotence.

After dinner, it is customary for guests to view the movies of film-maker Michael Moore and praise his great effectiveness in depicting the tranquility of pre-invasion Iraq, while passing favourable comment upon his charming personality, honesty and svelte figure.

Party games include Reality Twister and Pin The Swastika On The Hebrew, and the evening customarily ends with a coke-fuelled circle-jerk climaxing in a raucous chorus of The Internationale and a twenty-one spam-cannon salute for Comrade Stalin.

This resource is outstanding. In its rigorous definitions and punctilious cross-referencing it recalls Roger's Profanisaurus at its very best — full marks.

And this entry is surely the finest yet, exposing as it does the most nefarious and notorious of Liberal-Left-Guardianista-Chatterati activities.

Ridiculing a cross-party investigation into antisemitism because it appears on HP? You are the man!

I think they said black. Does that mean its white?

You are the man!

Thank you Alec, no PC multi-culti totalitarians will ever stop me exposing the treacherous babble of cosseted liberals.

Mr. McShane's sterling work in researching goings-on at Liberal Dinner Parties is boundlessly useful for the rest of us, who are stuck using good old-fashioned Decent Telepathy.

Stuart A - I'm surprised that a mealy-mouthed apologist for terror such as yourself would agree - I suspect it's some Stopper scheme to weasel your way into my good books.

As one who mocked your earlier attempts at satire of us "decents," credit where credit is due. This one is actually rather funny.

Is there any way that the man (or woman) on the Clapham Omnibus can gatecrash these dinner parties? They sound like a lot of fun, the food seems to be better than anything I've had recently and it would be nice to meet in the flesh a real "liberal relativist".

We plebs could try, Anon, but I suspect that, like Mr. Cohen, we would puke nauseated bile at the unserious displays of moral idiocy, and leave with peals of pretentious laughter ringing in our ears.

That's before we even get on to the dog-fucking.

Liberals, I ask you.

What is this obsession with Hampstead liberals? What about the many disgraceful Islington dinner parties attended by Nick Cohen? Are we just dogmeat now?