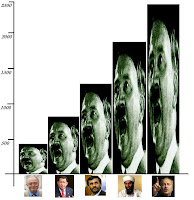 1. Chancellor of the Third Reich and notorious war criminal, Hitler was the architect of World War II and the Holocaust.

2. Perennial menace whose malevolent spirit infects all political figures opposed to the goals of Decency, to varying degrees.

The extent of Hitlerification is open to individual discretion and is reckoned by complex arithmetical formulas - Osama Bin Laden, for instance, rates at almost 2000 mega-Fuhrers (Click chart to enlarge).

3. Argumentative device whereby Hitler is invoked as a free-standing justification and moral blank cheque for bombing, most commonly expressed as The Lessons of History.

Also, the Do-You-Think-Hitler ploy, often used to discount humanitarian concerns about the bombing of military targets.

"Do-You-Think-Hitler worried about the rule of law when he decided to invade Poland?"

I'm also rather fond of the rhetorical ploy used to shame vegetarians ('Course, you know who else was veggie don't you? HITLER, that's who!'). I recommend its use against anybody and everybody.

'Course you know who else was Canadian/opposed to the Iraq War/a smoker etc., etc. HITLER, that's who!