Know Your Decency
A Regular Series 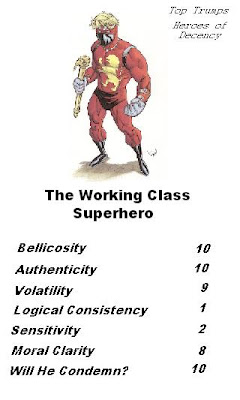 A titan of authenticity, the Working Class Superhero speaks for his entire social stratum with invincible moral authority, his every pronouncement a testament to the hard-learned wisdom of generations of ordinary Britons.

Appearing in public, onlookers gasp in astonishment at his amazing feats of humbleness, as he holds forth on who is and is not Tory filth, liberal scum, middle class vermin or fascist bastards. 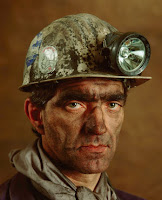 Using the boundless power of his proletarian bona fides, the Superhero defends New Labour, the beloved blue-collar tribunes of the people, from relentless attacks by an unstoppable tide of chardonnay-swilling liberal elitists and ivory tower intellectuals. Armed with only five cursewords and a hideously repellent personality, the Superhero lays waste to the Waitrose-shopping moral relativists who seek to crush the plebians beneath their perfumed heel.

For intellectual sustenance, the Superhero turns to those rough-handed sons of toil Christopher Hitchens and Martin Amis, hanging rapt upon their every word. No matter where they go, they can be sure that the faithful Superhero will be on hand to protect them from hordes of bruschetta-munching hatemongers.

Even when Hitchens finds himself in darkened basements calling for torture and perpetual war, the Superhero will be huffing close behind, all clattering pots and pans, crying "I don't know where you're goin', Mister 'Itchens, but I'm comin' with you!" like some kind of mentally impaired, modern day Sam Gamgee.

For the Working Class Superhero, all considerations are secondary to the need to kill fascists, a term he defines so broadly that it encompasses roughly 60% of the planet's population. Naturally, the Superhero is content to delegate the actual fascist-killing to others, preferring to direct operations from the rear.

In the wider movement of Muscular Liberalism, the Superhero is the lone wolf, the loose cannon, even moved to deny his own Decency on occasion. The deception fools no-one, however, for the Superhero's perpetual hissy-fits and generalised condemnations prove that you can take the man out of Decency, but you can't take the Decency out of the man.

hang on, hang on. This is jim Denham surely?

"hang on, hang on. This is jim Denham surely?"

No, it's Burnley's very own Simon Evans.