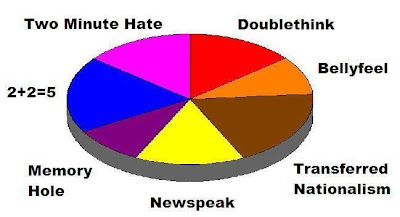 Orwell also manifested a deep hatred of birth control, despite living for nine months after the birth of Christopher Hitchens. Suspect, to say the least.

Its surely a mistake to allow the decents to claim George Orwell, and particularly his homage to Catelonia which includes a political line on the Spanish Civil War which most decents would describe as 'comedy'. Orwell for one thing had a deep and abiding hatred of imperialism, a decisive influence rather embarressing for the decents.

Ah, but he also said that the British Empire, for all its faults, was "a good deal better" than the emerging totalitarian states. This was because the totalitarians knew what they were doing, while the functionaries of the British Empire did not know what they was doing. Mutatis mutandis, this may be applied to the present situation, with Islamofascists who know what they are doing versus the cuddly but clumsy cruise missiles of the United States, which just can't help landing on the occasional civilian uniform wearer now and then.

My favourite Orwell quote with respect to Decency is:

One of the peculiar phenomena of our time is the renegade Liberal. Over and above the familiar Marxist claim that 'bourgeois liberty' is an illusion, there is now a widespread tendency to argue that one can only democracy by totalitarian methods. If one loves democracy, the argument runs, one must crush its enemies by no matter what means. And who are its enemies? It always appears that they are not only those who attack it openly and consciously, but those who 'objectively' endanger it by spreading mistaken doctrines. In other words defending democracy involves destroying all independence of thought.

Its neccessary therefore to make a distinction between Orwell the right wing icon, and Orwell the flawed but interesting leftist. The big difference between the latter and contemporary decents is that he was actually genuinely tortured politically (this was after all the historical period that Victor Serge described as 'midnight in the century).

Christopher Hitchens bears the same resemblence to Orwell that someone who thinks shooting heroin will make him a genius does to Charlie Parker. None at all.

Hey, I've got an email I want to send the editor... any idea how I get in touch?

Didn't Orwell end up living in Scotland and coughing his guts up?

Hold your horses and elephants everyone. A new devestating line of attack has been developed by the decents. Any complaints about civil liberties are to be greeted with reminders that in Burma matters are considerably worse. The new slogan which will take us foward into the 21st century is "better then Burma". Hattip Raj Decency in the comments section of the Tomb.

I met and worked with Hitchens and in no way would I compare him to George Orwell. Hitchens had an immense ego and never understood the common man/woman like Orwell did. He did a disservice to Orwell by writing a book about him that was not accessible to the layman. He wrote it to be recognized as an intellectual. Orwell wrote for and about the people. He strove for simplicity without dumbing things down. His decency and empathy became a part of everything he wrote and he doubtfully knew it. It was the way he was as a human being. He was not pretentious. He was himself. He was inherently a great man.