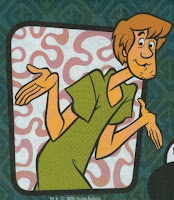 Risky yet potentially fruitful rhetorical gambit, whereby one asserts that the failures of certain foreign policy clusterfucks have been caused by astonishing, unforseeable acts of barbarity and random chance.

Amazing, utterly unprecedented occurrences that can be cited include -

Who would've thought that a modern military force could be stalemated by a committed insurgency? I mean, has this ever happened before?

Nobody could've predicted that demolishing a nation's civil structure would lead to lawlessness and looting...

I'm dumbfounded that an invasion and occupation of a country by a superpower would be met with foreign interference. It's totally unprecedented.

Jesus, if you'd told me five years ago that the Republicans would pack the CPA with clueless partisans and use the war as an excuse to loot the Federal Treasury, I would've called you a fascist and a twat... It's just unbelievable.

I could never have guessed that the US would respond to an invisible insurgency with brutal, overwhelming acts of demonstrative violence - I don't want to think about it too hard now, in case my wife has to wipe my exploded brains off my monitor.

These rhetorical gambits are useful when adressing the slow-witted, but may founder if accidentally presented to a pro-fascist familiar with the history of Vietnam or Afghanistan.

If caught out, immediately switch topic to the plight of Iranian Bus Drivers.

If pressed, it may be necessary to concede ground - see Mea Culpa Sed Tu Quoque Ad Maximum.
Posted by Malky Muscular at 13:58

I had a full and frank exchange of views with my boss in 2002 about the Iraq fiasco-to-be. I ended my devastating analysis with the deal that I'd drop the subject iff he swore not to do the "But with hindsight...couldn't have foreseen" BS, when it all went titsup. He yawed. After it all indeed went Pete tonge though, that's just wot the fooka did.

Malky, you have a picture of Shaggy and you don't mention 'The Scooby Doo Defense' in this context (or is that a separate entry?

Good point, although I may try to couch it in Decentese.