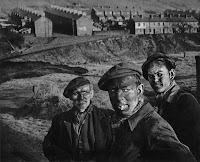 Social group of people employed for wages, especially in industrial or manual work, noted for their level-headed sensibilities, sense of humour and grim, steadfast hostility to the chicanery of Ivory Tower elitists and effete Hampstead liberals.

Represented in government by the humble, plain-spoken proletarians of New Labour, who wage a brave and unrelenting struggle against the megalomaniacal power-lust of chardonnay-swilling trendy lefties and the Academic/Media Complex's totalitarian grip on the reins of power.

With their natural ability to detect bullshit, they are instinctively distrustful of morally superior useful idiots and Saddam-fellating apologists for tyranny, preferring to place their faith in the callussed hands of modest, labouring sons of toil such as Martin Amis and Christopher Hitchens.

Frequently mocked by bruschetta-munching appeasers, who spend up to 75% of their waking hours urinating verbal filth into the upturned faces of the honest, upstanding people of Britain, leaving rough-hewn, Working Class Observer columnists to seethe at their own frustrated impotence.

Much as I hate HP, I've been to the Vortex, and it's one of the worst venues of any kind I've ever been to; if they burned it down and turned it into a sewage works, that would mildly improve the establishment; and Nando's-es are awesomely excellent, so the fact that they're turning the Vortex into one makes me extremely happy.

(BTW, I very much like the way that David T makes an obvious reference in the original post to Nandos'-es relation to Portuguese food, because of the whole Nando's/South Africa/Portugal thing, and someone raises Angola. Yeah, like that wasn't the whole fucking point...)