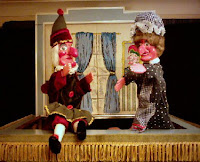 1. Unserious pandering to the infantile prejudices of ivory tower dwelling bien pensants by a light entertainer, in which the politics overwhelms the humour.

Smug, self-righteous moral and intellectual idiocy dressed up as the very apex of rib-tickling ribaldry.

2. Obsessive and suspicious activity indulged in by wankers.

3. Devastatingly witty response to any mildly political or military occurance, in which one imitates the tone of one's political enemies for chucklesome satirical effect.

"I see that there have been extensive blackouts in Tehran today, with some speculating that the elderly power grid cannot maintain supply to all parts of the city due to a lack of maintenance. Some are asking whether external actors may have played a part... Take it from the top, boys!"

"No, no, I've got it now, it was an eight-foot tall uberrace of NeoKKKon space-lizards who zapped Tehran's electricity networks with gamma rays and lazer beams from an orbital network of Hebraic satellite lazers!"

"You've taken that too far, Oliver."

LOLZ! I salute your indefatigability!

Surely a cartoon of George Bush as a monkey has to fit in somewhere...

News form elsewhere - Former Labour Minister Geoffrey Robinson has launched a round of cuts in the Decent Dole,

"Why did John Kampfner depart the New Statesman? Circulation fell 12% in the last six months and it is said the editor did not always see eye to eye with owner Geoffrey Robinson. Staff were also worried about the budget and set up a National Union of Journalists chapel for the first time just a week before Kampfner resigned. In another sign of tension the NUJ is acting on behalf of former columnist Nick Cohen - he also writes for the Standard - who alleges that his pay was cut by the Statesman without him being told"

Cuts in the Decent Dole!

Things have surely come to a pretty pass when a major liberal magazine is not willing to pay large sums to Nick Cohen to tell their readers what a bunch of fascist bastards they are.