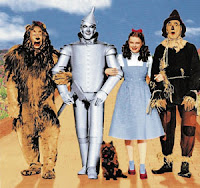 Pro-War protest, mounted by those who are On The Other Side.

A gathering of a few hundred cowardly demonstrators, tinfoil-hatted cranks and straw-men, marching together in support of fascist totalitarianism, motivated by suspicious, obsessive self-hatred and a longing to be crushed under the Islamofascist jackboot.

A rollicking good party of apologism where useful idiots cavort indecently, celebrating their childish rebellion against the father figures of authority, while furiously laughing and wanking mucky splurts of pro-Jihadi ichor into the trusting, pleading faces of the victims of tyranny.

The main Anti-War Protest of 2003 was the Bastille Day of Decency, at which several hundred Decents experienced epiphanies when faced with a broad coalition of fascists, trendy lefties and Ivory Tower elitists, thereafter penning atrociously dull books describing their brown-trousered horror.

"When I awoke on the morning of 15th February, I discovered that one million Britons had chosen to march in support of a fascist regime - the largest such rally since the marches against the overthrow of General Franco in 1975...

When I asked one young marcher why she was marching in solidarity with fascists, she resorted to a glib witticism, braying "Mister, yer fly's open and yer balls are hanging out!"

Looking down, I was horrified to discover that she was correct - it was at that moment that I espied Lady Fotheringhame, who was staring open-mouthed at my exposed clackersack in shock and undisguised revulsion...

"I can explain everything!" I blurted, stepping forward, but unbeknown to me a police horse had just that moment laid a fresh deposit of steaming manure, and I slipped and stumbled forwards into the ample bosom of a heavyset lady in a floral dress. My protestations of innocence went unheeded as she began to thrash me with her handbag..."

Extract from What's Left? by Nick Cohen
"I was deeply and passionately anti-war, determined to demonstrate my implacable hatred of the Nazi imperialist George Bush. I marched to show my steadfast commitment, my moral certitude and my genocidal hatred of western democracy...

...Then I clapped eyes on a crusty juggler talking to a bloke with a beard, and the scales fell from my eyes... I immediately threw my lot in with the pro-war crowd, who were far cooler kids, had better parties and free beer."

Extract from The Joy of Sectarianism by Andrew Anthony
Posted by Malky Muscular at 11:44

Why did Andrew Anthony give his book a title that guarantees no left-winger will buy it?

Duh - because, Stopper, it's intended for real left-wingers.

You know, the type that are into privatisation, chimpanzoid patriotic chest-beating and catastrophic military adventurism.

Those types of left-wingers.

Franco wasn't actually overthrown, except possibly by forces of nature.

Tschaw - I know that. I edited out Nick's mention of the Regime for brevity.

Incidentally, I'd have done Overthrow ages ago if Steven Poole hadn't done it so well first.