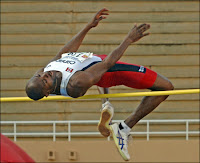 Craftly rhetorical wriggle for excusing the departures from universal principles of nations basking in the warm glow of Decent affections.

Exculpatory gambit used to cast suspicion upon the motives of any person with the audacity to suggest that civilised nations should not bomb heavily populated urban areas, even if terrorists are bad.

"The massive bombardment of Beirut's most heavily populated areas and the deliberate destruction of civilian infrastructure including roads, shops, petrol stations, factories, ports and airport runways, amongst many others, were clear violations of international laws and war crimes."

"How ridiculous - I object to your obsessive singling-out of Israel. Why should this one, tiny state be held to higher standards than everybody else?"
Posted by Malky Muscular at 12:30

Why should this one, tiny state receive so much money from the American tax-payer?