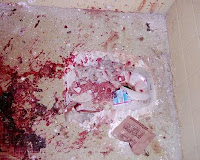 Exculpatory linguistic wriggle for distinguishing the criminal brutality of civilised nations from that of fascist tyrannies, best summarised as "Okay, we torture people to death, but if it wasn't for us torture wouldn't be illegal in the first place."

The practice of beating restrained prisoners to death, "Palestinian hanging", coercive drowning, sexual humiliation and other forms of torture, in a network of secret military prisons kept beyond judicial oversight, as tacitly approved by the Republicans.

Moral blank cheque written to ensure that the war crimes of one's allies are put into perspective. When used in conjunction with We Punish War Crimes, We're Nicer Than Saddam and Terrorists Are Bad, allows one to reclaim the moral high ground.

From section C of the Euston Manifesto...

"The violation of basic human rights standards at Abu Ghraib, at Guantanamo, and by the practice of "rendition", must be roundly condemned for what it is: a departure from universal principles, for the establishment of which the democratic countries themselves, and in particular the United States of America, bear the greater part of the historical credit."

Criticism of any such Departures From Universal Principles is permitted only after the recitation of the Catalogue of Contempt in its entirety.

Should not be confused with the minimisation of atrocities, which is solely a tactic of the far Left.

External sources - My Jack Bauer Fantasy by Nick Cohen, What's With This Silly Taboo on Discussing Torture? by Norm Geras, Terrorists Are Bad So Why Should We Give a Shit About Arbitrary Detention and Torture? by Christopher Hitchens.