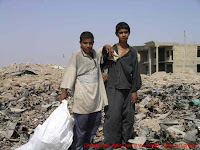 Tha Ruh-Buhl
What remains after the judicious application of the Decent Debating Technique and Terrorists Are Bad have led to the complete collapse of a Middle Eastern nation.
Smelly, disorderly pile of exaggeration, moral blackmail, sanctimony and outright lies, upon which a shining era of democracy and human rights shall be built.
That which must never be picked through, unless it is necessary to cannibalise raw materials for the liberation of Iran, Lebanon or Syria.
"the proper concern of genuine liberals and members of the Left should have been the battle to put in place in Iraq a democratic political order and to rebuild the country's infrastructure, to create after decades of the most brutal oppression a life for Iraqis which those living in democratic countries take for granted—rather than picking through the rubble of the arguments over intervention." - Euston Manifesto
Posted by Malky Muscular at 00:36