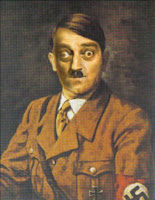 Faux-innocent argumentative manoeuvre, handy for pretending not to understand the difference between the concept of an American Israel lobby comprising right-wing cranks, and the idea of an all-powerful secret cabal of eldritch Zionist Cthulu-Monsters who can command the United Nations with the merest flick of a gelatinous tentacle.

Generally employed when confronted with inconvenient opinions, this simple technique sets a metaphorical army of miniature clockwork Nazis goose-stepping all over the argument, thus bringing it to a swift conclusion.

"Well, I think it's pretty obvious that American policy in the Middle East is heavily influenced by a small group of hardcore Republican partisans, religious fundamentalists and general right wing monomaniacs."

"Why, isn't that interesting - you are in agreement with neo-nazis, Mahmoud Ahmadinejad, David Irving, Mussolini, David Duke, Rudolf Hess, Adolf Hitler and Darth Vader! I find that rather suspicious."

Useful tip - lazier Decents can shorten "I find that rather suspicious" to simply "hmm.." thus creating valuable time to continue the crusade against the anti-semitic hordes on other blogs.

Do one on intervention. Please.

'Professor Taylor's inability to distinguish an "invasion of Iraq" - as if a state's legitimate sovereignty had been violated by the removal of a bestial and kleptocratic regime - from an intervention in Iraq is merely the least of the many components in the evidence of his stupidity.'

I think that Cthulhu, is spelt thus-with an extra "h".
Sorry.