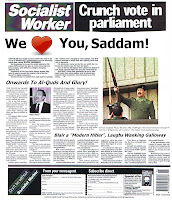 A fringe groupuscle of suspicious, unserious ideologues whose influence upon the public consciousness is precisely nil, the Far Left is a rabid, ravening wolf begnawing the soft underbelly of British democracy.

Led by George Galloway, Brian Haw-Haw and the Academic/Media Complex this ludicrous gaggle of clueless no-hopers and bumbling intellectual pygmies threaten to undermine the very foundations of law and liberty.

Perpetually colluding with fascists to destroy all human freedom or spewing racist propaganda in preparation for a new Holocaust, these insignificant non-entities can be found prattling their snakebite-fuelled drivel to three men and a dog on any given night.

Their risible attempt to prevent the liberation of Iraq having been met with public derision, these feeble political assassins have pressed the curved scimitar of Islam to the throat of civilisation by conspiring with a comically inept band of ruthless, bloodthirsty Jihadist monsters. 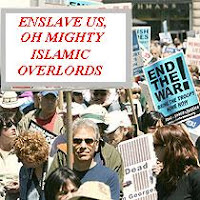 These farcical buffoons are closely watched by vigilant Decents, whose commitment to resisting the hideous threat of these useful idiots is vital in the quest to confront fascism.

No Muscular Liberal would ever miss an opportunity to point out how the Far Left's prohecies of resurgent Western imperialism and malfeasance have fatally wounded its credibility.

Known for their intolerant boycotts and demonstrations, the Far Left would never miss an opportunity to gloat over the Failures in the Reconstruction Process that have blighted Iraq's transition to stable democracy.

Far Left: political parties about which the Decents have a morbid fascination, possibly because they once were in those parties.

Far Left: political parties that are so hideous to Decents that they cannot go on anti-Iraq War demonstrations in case they meet them (even if the claim to oppose the invasion of Iraq) (Alan "not the Minister/journalist/footballer" Johnson, passim)

"possibly because they once were in those parties."

cf: Those commentators who proudly state "I used to be a Guardian Reading, Socialist Worker selling uber-leftist until Melanie Phillips and Peter Hitchens showed me the light."

Which translated into English means "I was an easily-led idiot, willing to attach myself to a stupid ideology. And I still am.

Please can I play with your toys now?"