Odious hosepipe of hateful propaganda, urinating a thick stream of relativist bile into the eyes and ears of the hard-working, honest people of Britain.

Commonly associated with Hollywood, but in reality championed by the brie-eating liberal intelligentsia and ivory-tower elitists of the BBC.

"...so consistent was the pro-Islamist party line in the BBC's drama it seemed as if a politburo had taken control of the arts department."- Nick Cohen

Pro-Jihadist re-imagining of the traditional legend, in which Osama and his Merry Islamists fight bravely against a thinly-veiled Tony Blair, as played by a short, fat, bald Keith Allen. This foul slice of terrorist-promoting light-entertainment repeatedly penetrates the eyes of innocent British children nationwide, spurting great wads of disease-ridden filth into their fragile little minds. With Minnie Driver. Producer Nigel Gurning-Twitte

Racist drama chronicling the struggle of the intelligence services to expose the megalomaniacal schemes of a secret clan of demonic Jewish space-lizards from Saturn. German subtitles available in some areas, press red for extra Protocols. Producer Lavrenty O'Toole 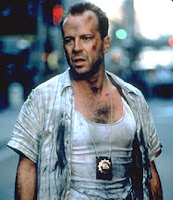 Honey, I Wilfully Blinded Myself To The Urgent Threat Of Islamist Fascism (2005)

Fantastical action movie, starring Bruce Willis as a hard-bitten New York cop who must battle a thousand-strong band of fanatical terrorists from England, Germany, America, Russia, Australia, Mexico, Israel, Italy and Spain. Not a Muslim amongst them, of course, which is typical of the mealy-mouthed appeasers of Hollywood. Honestly, do you remember Delta Force? Proper bad guys, then, all swarthy and filled with genocidal bloodlust... That scene where Chuck Norris blasts that Palestinian with his motorbike's built-in grenade launchers, I was stiff as a rolling pin, I can tell you. But you don't get proper films like that these days, do you? No, it's all bending-over-backwards-to-avoid-offending-the-Muslim-fascists, isn't it? Bastards.

Daily litany of false accusations about the legitimate security operations of western nations. With Fiona Bruce.

Hillary Benn and the American ambassador face hate-filled tirades from a jeering mob of liberal scum, while John Humphries and George Galloway fight to be first to lick the hot, salty tears of sorrow from their honest, trusting faces. Producer Tarquin Pierrepont

04:00 - With the clock ticking on an ebola-stuffed nuclear bomb, Jack is forced to take radical measures against an injured prisoner by shoving his arm down the suspect's throat and pulling his arsehole out of his nose. President Palmer faces a dilemma as he decides whether to accede to the terrorists' demands or to push a corkscrew into Mahmoud's eye really slowly. Meanwhile, Kim is menaced by a slightly annoyed cougar while sporting a truly sensational cleavage. Contains scenes of masturbatory violence, torture and sadism, although curiously, no strong language. Those crazy Americans, eh?

Screens that flicker and fail to challenge

Post-script to the new edition of What's Left?

Nobody capable of pronouncing liberal with three syllables would pronounce culture as Kult-Yer. It would be Kult-Chah or just plain Kultch', the apostrophe representing a nonvocalised aspirate.

Then again, maybe it would be klcreoeh, which is how Word Verification says it.