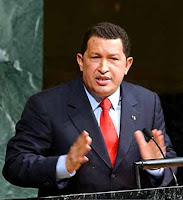 It has come to my attention that some consumers of Decent journalism and bloggery may have formed the impression that we believe President Hugo Chavez of Venezuela is a megalomaniacal tyrant, drunk on power and intent upon launching a thousand-year reich of fascist horror.


Readers may also have misinterpreted our principled stand against Britons who write positively of Chavez as somehow indicating that they have "brought shame upon the Left".


In fact, nothing could be further from the truth.


Nonetheless, having re-examined articles and posts entitled Bloodthirsty Dictator Chavez Crushes All Human Freedom; Fascist British Chavistas - The Shame Of The Left and Nationalisation of Corporate Interests - Who Will Be First Into The Gas Chamber?, I can see why some confusion might have arisen.


As the official scribe of Muscular Liberalismtm, I can categorically state that we have always believed that Chavez is merely a very silly person, if not an outright figure of fun. His recent electoral defeat merely confirms that he is rather weak, ineffectual and something of a comical loser.


Nor have we ever intended to imply that leftists said nice things about him because of their inward yearning for the crushing of all democracy beneath the Latin jackboot. It was not our intention to imply that modern socialists are generally a feeble-minded mob of genocidal cretins whose brains are ripe to be washed with the most hateful and violent ideologies imaginable.


No, these leftists have instead "brought shame upon the Left" by believing the words of this empty-headed charlatan and his sub-Chomskyan jeremiads.


I hope this clarifies our principled position against this terrifying, cartoonish stuffed-shirt and his pathetic, hilarious attempt to overthrow democracy and create a totalitarian communist empire.


P.S. I have recently discovered that certain unserious writers have implied that our honest stance against Hugo Chavez is motivated solely by our desire to crush anyone who says nasty things about George W. Bush. Others have claimed that our position is motivated by our maniacal urge to discredit and destroy any political movement to the left of Blairism.


I can confirm that these accusations have no basis in fact, and are being circulated by a small, dishonest group of irrelevant, Stalinist throwbacks whose hatred of the American President has warped their tiny minds.
Posted by Malky Muscular at 21:34