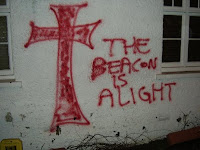 Nuffink To Do Wiv Me, Guv, Aaronovitch Watch
Posted by Malky Muscular at 12:28

One slight quibble Malky. You do not point out that the EDL are most probably leftist maniacs like the BNP who do not appreciate the genius of John Major's railway privatisations and the immense debt we all owe to the neo-liberal wunderkinds who decided to deregulate our banking sector.